Background: The roots of Polygonum multiflorum Thunberg (Polygonaceae) are a crude drug known as Kashu and are thought to improve blood deficiency as a Kampo concept. Kashu is added to Kampo formulas, including Tokiinshi, which is used to treat eczema and dermatitis with itchiness by facilitating blood circulation in the skin. Although anti- inflammatory effects were expected, the reports on anti-inflammatory constituents of Polygonum roots are very few.

Methods: Polygonum roots were extracted and fractionated based on hydrophobicity to three fractions, the ethyl acetate (EtOAc)-soluble, n-butanol-soluble, and water-soluble fractions. Constituents were purified from the EtOAc- soluble fraction, and its contents were measured using liquid chromatography-triple quadrupole mass spectrometer. The interleukin (IL)-1β-induced production of nitric oxide (NO), a proinflammatory mediator, in rat hepatocytes was monitored to assess anti-inflammatory activity.

Results: The EtOAc-soluble fraction inhibited IL-1β-induced NO production, whereas the other fractions did not. Six constituents were isolated from the EtOAc-soluble fraction and identified as (E)-2,3,5,4'-tetrahydroxystilbene-2-O-β- D-glucoside, emodin, emodin-8-O-β-D-glucopyranoside, physcion, physcion-8-O-β-D-glucopyranoside, and catechin. Emodin and emodin-8-O-β-D-glucopyranoside significantly inhibited NO production in hepatocytes, and the others showed less potency in suppressing NO production. These two anthraquinones decreased the protein and mRNA levels of inducible NO synthase, as well as the mRNA levels of tumor necrosis factor α. In a search of the literature to date, the comparison of pharmacological activity of the constituents of Polygonum roots was not reported.

Conclusion: These results suggest that hydrophobic constituents in the EtOAc-soluble fraction, especially anthraquinones, may exert the anti-inflammatory effects by treatment with Polygonum roots. 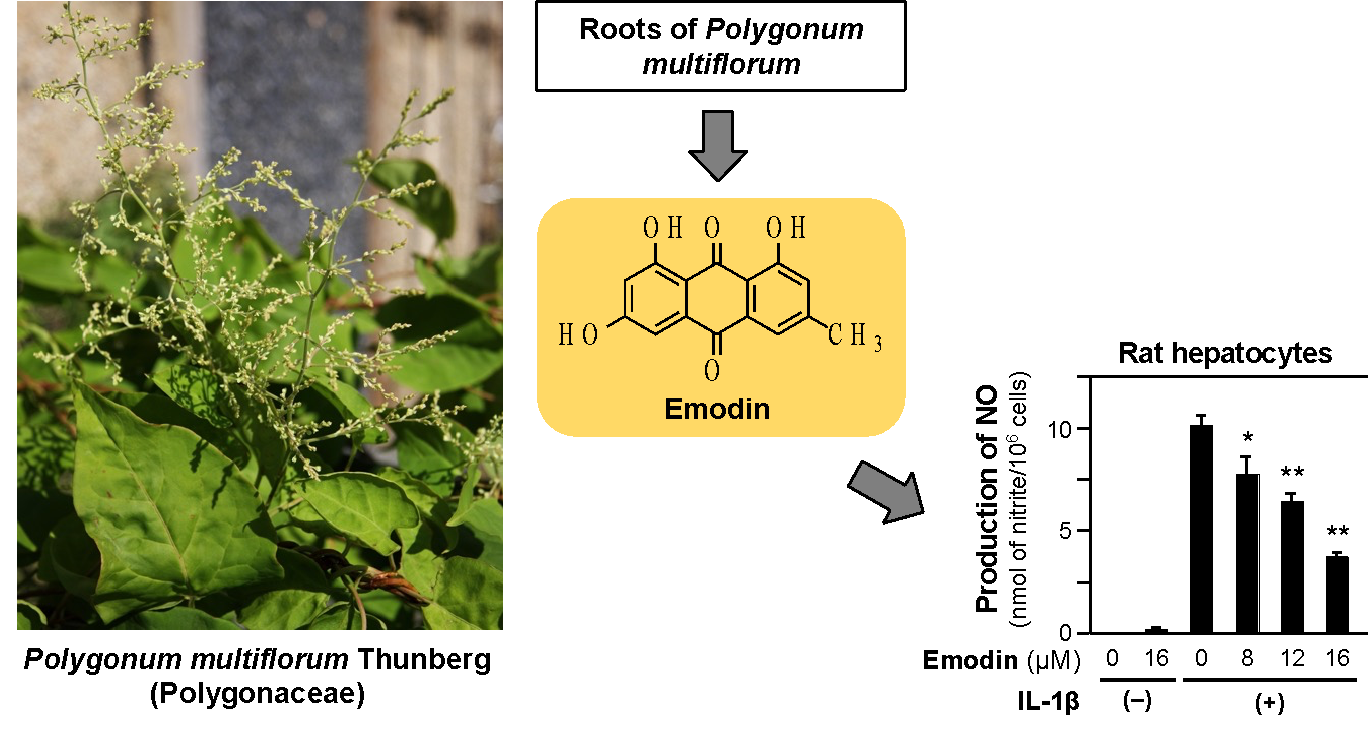